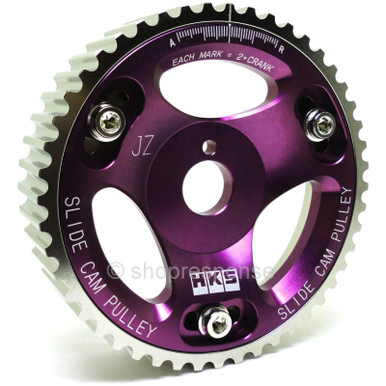 HKS Cam Gears allow precise tuning of camshaft timing, which is an essential tool for optimizing engine output and when using aftermarket performance camshafts. Manufactured using durable and super light Duralumin (A2014) as its main material, the strength has increased by 50% and hardness by 30% (over previous version). This change in material has also allowed the unit to be substantially lighter (less load on engine) increasing engine reliability and power. The gear section is nickel plated to increase the surface hardness (HV: 350 → 500, compared to previous version) to withstand strengthened timing belts and any foreign objects that may get caught between the gear and belt. Each cam gear features a hard anodized purple coating and are finished off with laser engraved timing marks and HKS logo. Fits both stock and aftermarket camshafts. 100% genuine HKS product. Part# 22004-AT003. Made by HKS Co., Ltd. Japan.

*Please note that only one cam gear (exhaust side) is required for the applications listed below.