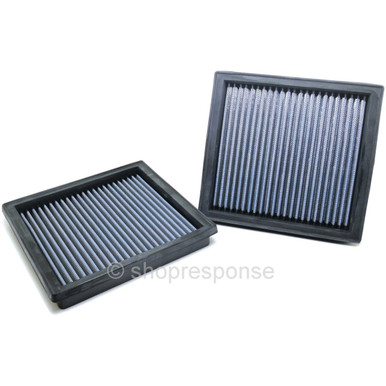 The BLITZ SUS Power Air Filter LM is designed to reduce intake restriction, improving horsepower and acceleration all while providing maximum filtration without sacrificing the stock air-box. The drop-in, factory replacement design means adding performance is simple. And, unlike conventional air filters made of inferior paper, the BLITZ LM air filter element is constructed of a quality cotton material without any assistance of oil to aid in filtering. Some oils that are used to aid in filtering can overtime disperse into the inlet tracts of the engine, slowly reducing the performance of the vehicle. Filter life has been tested to operate over 15,000 miles (25,000km) under normal street driving conditions. The filter can be periodically cleaned if necessary by blowing compressed air through the filter, opposite the direction of inbound airstream. 100% genuine BLITZ product. Part# 59518 / WN-227B. Made by BLITZ Co., Ltd. Japan.